We have finally hit the road again in order to escape the summer heat and have headed up to San Fransisco for a friend’s memorial service. We left Wednesday night and got a late start because we had to change out the tow bar for our Geo Tracker that we pull behind the 24ft Class C Icon. You can’t have a vehicle that is very heavy because the Icon just doesn’t have the strength or guts to pull a regular car, so the Geo it is.

It was close to 10:00 pm and we were on the James Dean Highway about an hour or so from Paso Robles when we decided to get diesel before we ran out. It is always a concern for me because not every gas station serves up diesel fuel. We spotted a sign with a good price and wheeled in to fill up. It was then that we noticed that huge trucks were lined up around the block, all waiting to do the same thing. These trucks use a different fuel than the RV and I had to run into the cashier to find out if the type we could use was sold there. Biofuels won’t work and she told me to go to #25. We were able to zip past at least 50 trucks and pull up to the right tank only to find out that the nozzle was on the wrong side of the tank. There was no way we could get back into line and start all over again, so guess what we did?

You will not believe it, but we actually rolled down both windows and got as close to the nozzle as we possibly could, and then I got out and nursed it upside down and through the two windows and handed it to Michael. We were about an inch short, so Michael handed me back the nozzle and I returned it to the handle and with my guidance, he gingerly crept a little closer by scrapping the hub caps ever so gently along the protective curb and we repeated the process all over again.

Voila, this time it worked, but only barely. Truckers were watching us and laughing and most of them were amused at either our stupidity, ingenuity or our craziness, or all three, we weren’t really sure, and I didn’t give a damn because it was late and I was tired and I was determined to make it a success no matter what. To be honest with you, I actually pulled a little bit on the hose just to stretch it out enough to give Michael enough room to plunge it in.

Once we filled up, he even had to run back into the cashier’s office and get a $2.00 refund because we weren’t able to use up all of the $60.00 worth. You had to pay in cash and in advance before you could use the pump. As we pulled out and gave each other a high five, we passed just as many truckers waiting in line to fill up. It was an amazing sight to behold and I was saddened to see just how desperate these truckers must be to save what money they were going to save. It was the cheapest diesel in town and the busiest by far. You would think that other businesses would get the hint. None of them had lines wrapped around the block…

After another 45 minutes of driving we came to a rest stop and pulled up alongside many of the truckers we had seen at the gas station. Our tiny little RV amongst all the big boys is a sight to see. It was midnight by then and we just put the slider out and climbed into bed relieved to be off the road. I listened to the huge motors idle that never turn off and appreciated the sacrifice truckers make to carry our goods across the United States. It is not an easy life.

Callie loves riding on the dash again and we made it safely to San Fransisco by Thursday early afternoon. It was a long two days of driving and we pulled into the San Fransisco Resort RV Park exhausted and happy to have finally arrived. 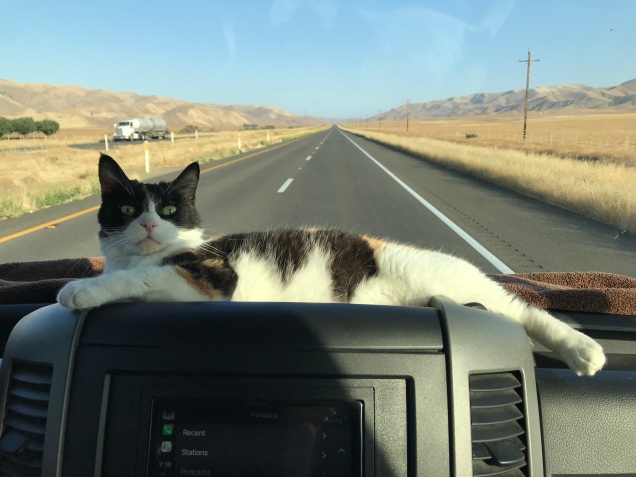 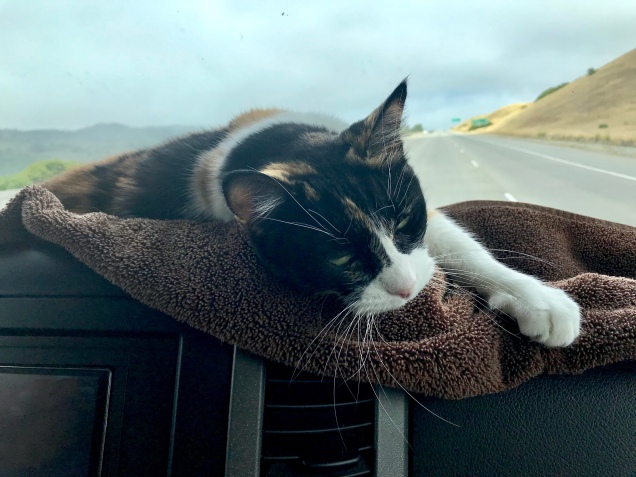 One thought on “Believe it or Not”