I have made a new friend at the Heron Rookery and it is a Black-Crowned Night Heron. He is quite comfortable around me and as long as I don’t intrude on his space, he poses so elegantly and goes about the business of hunting and standing on his perch without fear. Night Herons are notoriously shy, so I feel quite amazed that he is as tolerant of me as he is. I am reminded of my relationship with Sweet Pea, a Costa’s Hummingbird that I have known for years in the desert. I get up early most mornings and head over to the rookery or the marina for a couple of hours of photography, and then I return to the RV for photo editing while Michael focuses on his research papers. We both enjoy life in our cozy 24ft RV and the setting is conducive to uninterrupted quality time to focus on our passions that we work on side by side for hours at a time.

Morro Bay has managed to coexist with wildlife and it is rather unique if you ask me. Many of the eucalyptus trees that line Main Street are filled with Black-Crowned Night Herons, and to turn the other cheek when it comes to the massive amounts of bird poop that falls below is the exception to the rule. When you park your car here, if you see a white discoloration all over the sidewalk, find another space to park your car or you will have poop on it too. Most cities would find a way to scare the birds away in favor of people, and it does my heart good to see the tables turned with animal nesting sites instead of the other way around. We have encroached so much on wildlife habitat that they have been forced to nest within city limits, but a balanced approach is necessary. The herons are very messy, so I do hope that they don’t over stay their welcome and force the city to evict them.

Michael and I also bike over to a look-out south of Morro Bay towards Cayucos every day for exercise and Callie is back walking on a leash because she became too bold when left to her own devices. She has rough and tumble playtime every day and her asthma is controlled again with a chicken-free diet and prednisone cream that is applied to the inner ear flap. We will be here until the end of the month and head north to Monterey for a month after that.

Happy Father’s Day to all the men out there who have raised or who are raising children. It can be a difficult but rewarding job, and a very important one too. Our society seems to be tearing apart at the seams, but hopefully we can vote Trump out of office and bring civility back to the United States. Vote Blue in November as if your life depends on it.

Believe in the Black Lives Matter movement; racism needs to be addressed and stamped out once and for all. BLACK LIVES MATTER!

Forgive me if I am wrong, but I believe that domesticated cats are getting much smarter than say, 62 years ago when I was a child. For instance, Callie taps me with her paw to get my undivided attention, meows and stares me in the eye before she starts chewing as if she is hungry. She is asking me to feed her. How obvious is that? It cracks me up every time she does it, and her actions are then positively reinforced. She doesn’t want leftovers and asks so sweetly for fresh food on demand. If she wasn’t so damn cute, it would quickly escalate to nightmare status.

At least for now, I have trained her to jump down from the bed at night, where I have placed a dainty glass bowl of fresh kibble on my nightstand. That is a huge improvement. At one time earlier in our relationship, I was a slave to getting up several times at night in order to feed her frozen kibble. I know it sounds like I am a pushover, but Callie sure does know how to lay down the law! I mean charm… 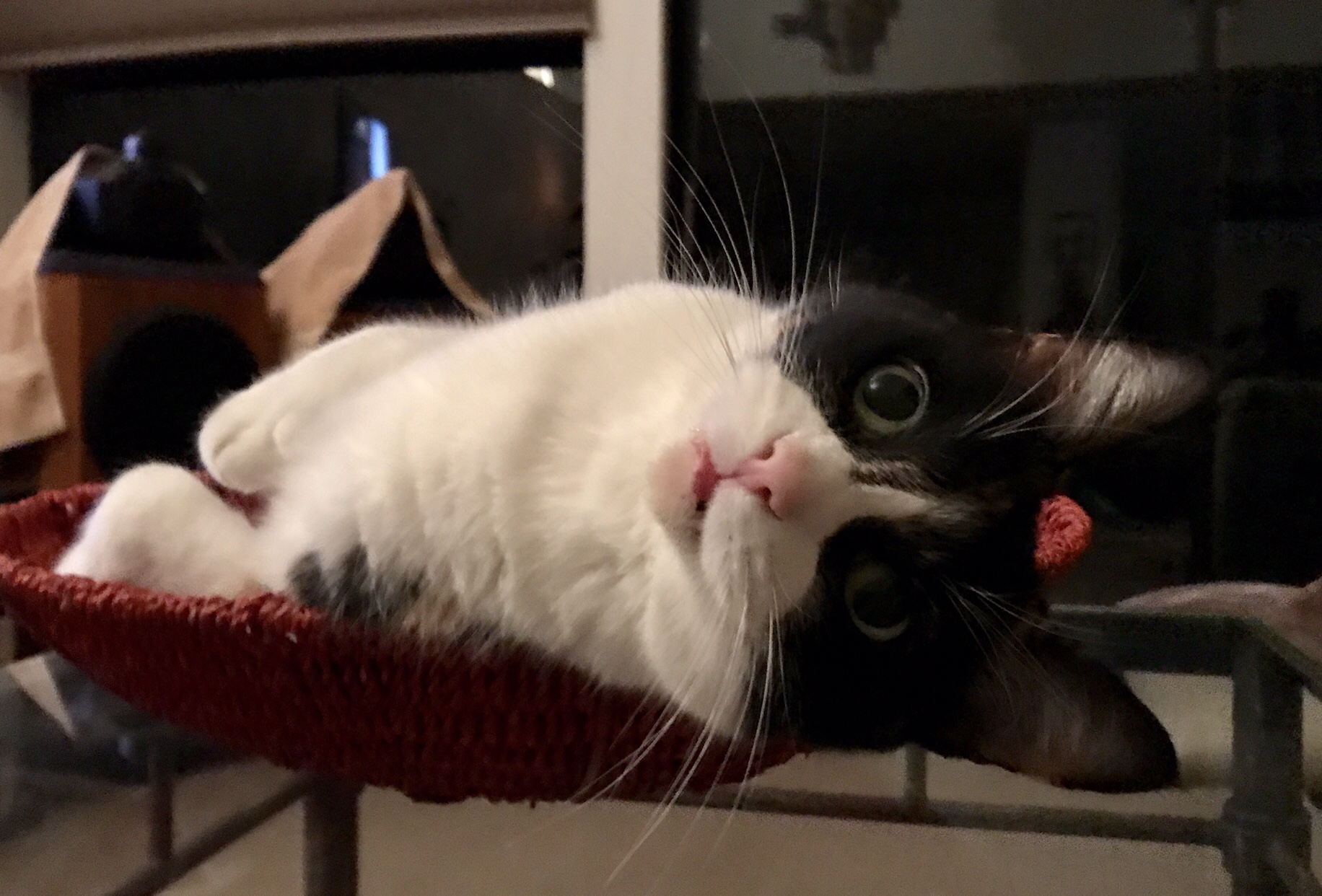 Michael, Lara and I had an impulsive brainstorm that we could somehow find a way to camp overnight in Yosemite Valley without a reservation. We spent the morning making an effort to be put on a waiting list and then drove over to the one available spot to park in order to hike up to Mirror Lake.

Once we parked the RV and piled out, the three of us crossed the gorgeous meadow over the lovely boardwalk and headed to the lake. Callie stayed behind in the RV and took a much-needed nap. All the fun and excitement of travel takes it out of her, and the chance to get some sleep mid-morning is a treat for her.

Leaving her safely behind, we meandered along Tenaya Creek and I spent a couple of hours taking photographs and walking through the woods with Lara and Michael. It was a beautiful, crisp afternoon, and because Mirror Lake is no longer dredged and pillaged for its ice like it was in the past, it is more of a puddle than a lake. I was still able to capture incredible, reflective images in spite of the low water level, and felt that the hike was more than worth it.

The view was incredible, with light and shadow passing over the rock formations and changing dramatically with each minute. The leaves on the broadleaf trees were just starting to turn golden in color, and there was a hint of autumn in the air. The path is paved and cyclists can now bike up to a parking area before walking the rest of the way to the lake. Rental bikes are available and a lot of people took advantage of the opportunity.

Once we returned to the RV and made an effort to see more of the Valley, we were entangled in one traffic jam after another. Michael was never able to find a place to park after that, and we decided collectively to head over to Lee Vinning and find a camping site at Mono Lake. Little did I know that Tioga Pass was experiencing an early, fall blizzard and that Callie was going to be able to watch the snow blow past on the dash. She didn’t know whether to be excited or freaked out as the windshield wipers were activated.

In spite of the crowds in Yosemite, it is still a beautiful place to visit. I recommend taking the time to get a reservation though, and I don’t recommend driving an RV around. Take advantage of the numerous shuttles that are available and plan a long day of exploring. It was just too difficult this time to find a place to park, and maneuvering the RV from one spot to the next, became a chore! Fortunately, Michael, Callie had I had visited the valley last summer and didn’t feel too disappointed, and Lara was a good sport about it and didn’t complain.

While camping at the Monterey Fairgrounds this summer, we would take Callie out for walks on her leash so that she could explore her surroundings. The oak trees were protected and couldn’t be cut down and had grown quite massive in size. The crows would fly in as a flock of 50 or more to feed on the trees in the late afternoon.

Dusk was just starting to fall and the light was fading. You could hear them long before you saw them. We would look up at the sky at the sound of caws in the distance and see specks of black dots moving toward us like a darkening cloud of locusts. Soon they would descend on the oak trees as a mob and peck at the bare branches and the plump acorns in a frenzy of feeding. The acorns would crash down noisily onto the aluminum roof of the livestock showing pens, and plop with a crunch on the dried up leaves at the base of the tree.

The sound was deafening and the birds would be screaming and shouting at one another the whole time they fed. It sounded like a version of happy hour for these birds, and it was really quite the sight to behold. The clicks and caws and screams could be heard all over the campground and there was a special alarm call when they spotted Callie! Three crows, in particular, stayed put and kept looking at us from up above in astonishment that a cat was down below. When we got too close, rather than fly away in alarm, they shouted obscenities at us and hurled insults like a gang of misbehaving children. As Callie passed underneath their particular tree, I swear they made an effort to bomb her with debris. Callie would have liked nothing better than to climb the oak tree and give them a piece of her mind.

At the end of the day, not having packed toys for Callie, she had to make do with a paper bag in which to work out her pent-up aggression!

Last summer we took the RV through Washington and the ferry over to Vancouver Island to introduce Callie to sailing on my brother Tom, and his wife Frances’s, catamaran. Tom built this boat when he was in his twenties, and Alfresco is still seaworthy after 40 plus years. Callie took to sailing like a duck to water and my fear of her going overboard were never realized. She loved boating and being on the water. It was very exciting when we were under sail, but Callie showed little fear. When we dropped anchor, she explored every nook and cranny. Only once did she slip while heading to the stern and when that happened, she made sure to land on the deck and walked away with tail high in the air, as if nothing had happened and she had planned it all along.

Yakima, in the beautiful state of Washington, is known for having survived Mount Saint Helen’s eruption in 1980 and burying the region with nutrient ash. The positive consequence of this is that the soil is extremely fertile and anything that is planted, flourishes. Wineries have produced some of the best grapes for both red and white wines. The Columbia Gorge and Columbia Crest Chardonnay are one of my favorites, but I loved just about every wine I sampled. I am of the old school and love the taste of a bold, oak flavor. This only happens when the wine is stored in oak casks. The latest trend is to keep the wine in stainless steel, but I do not like the crisp taste that stainless steel produces. Fortunately for me, many Washington State wineries still favor the oak.

We are heading back home to Anza-Borrego Desert State Park after a month of being on the road. We forgot to pack toys for Callie, so a thrift store bag and iPhone chord will have to do! The thrift stores in Monterey and Carmel are incredible. The Humane Society Thrift Store, The Yellow Brick Road and Joining Hands help the homeless and animals that need to find a home too. Callie loved playing in the bag after we finished shopping. 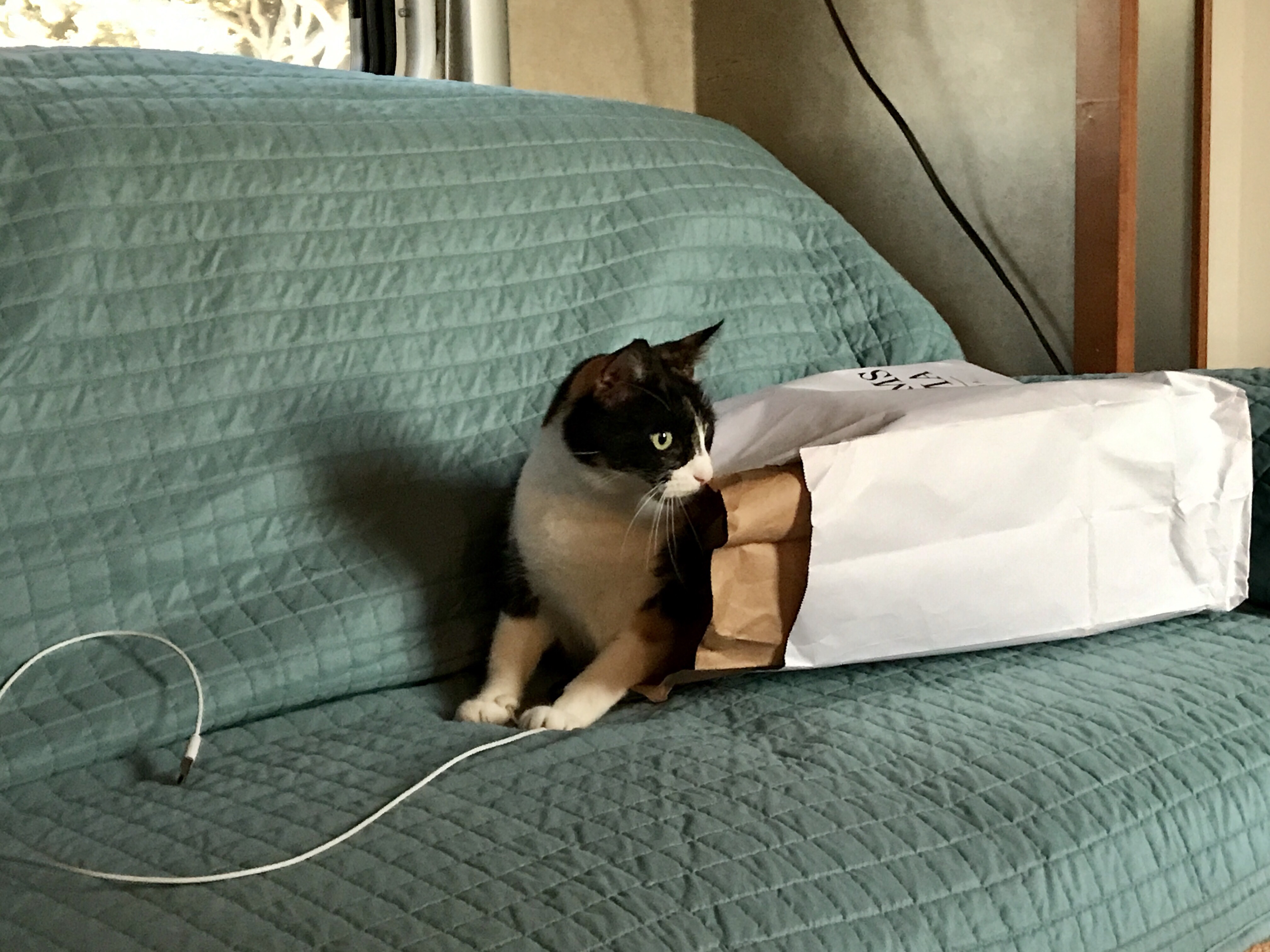 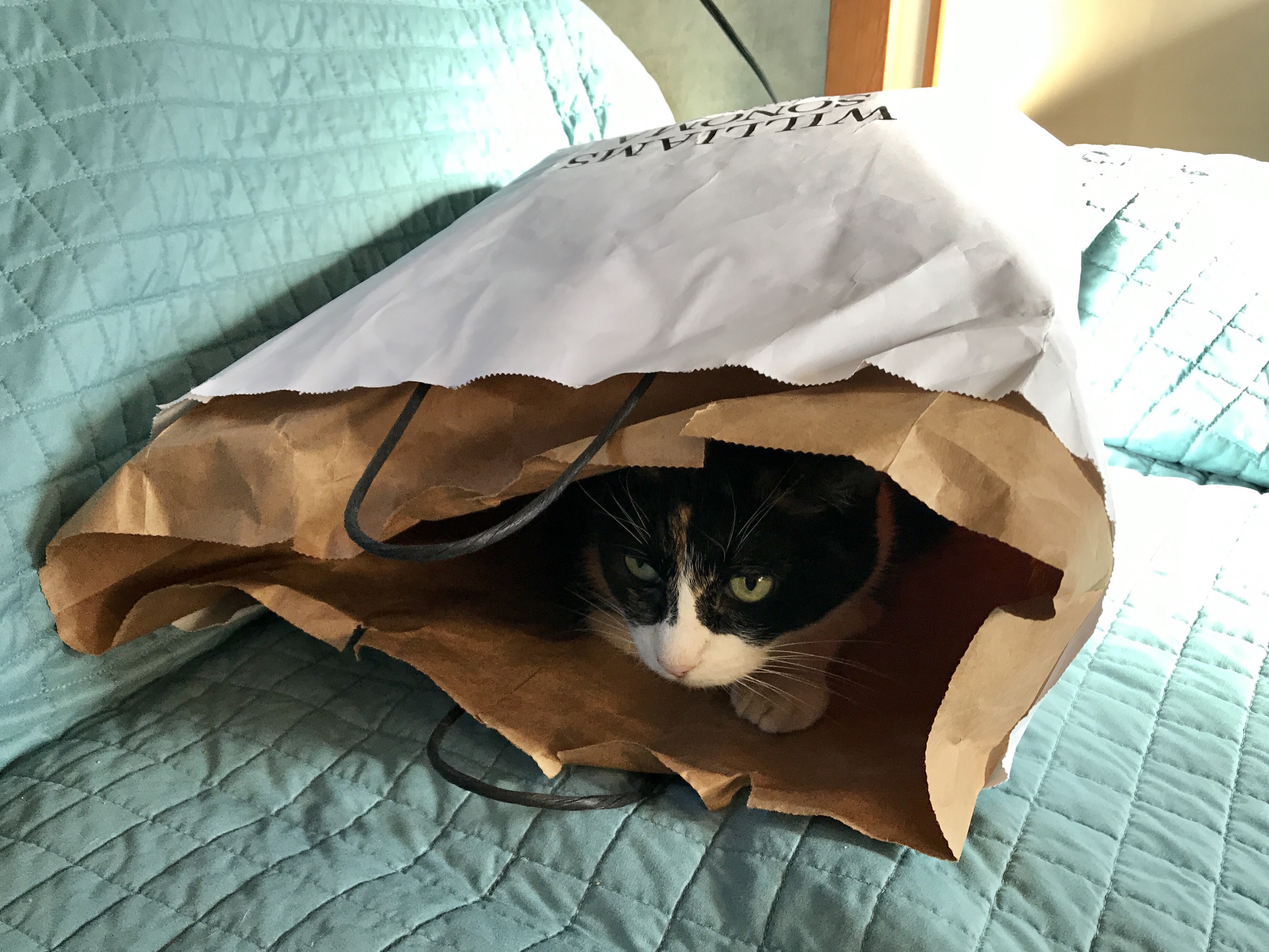 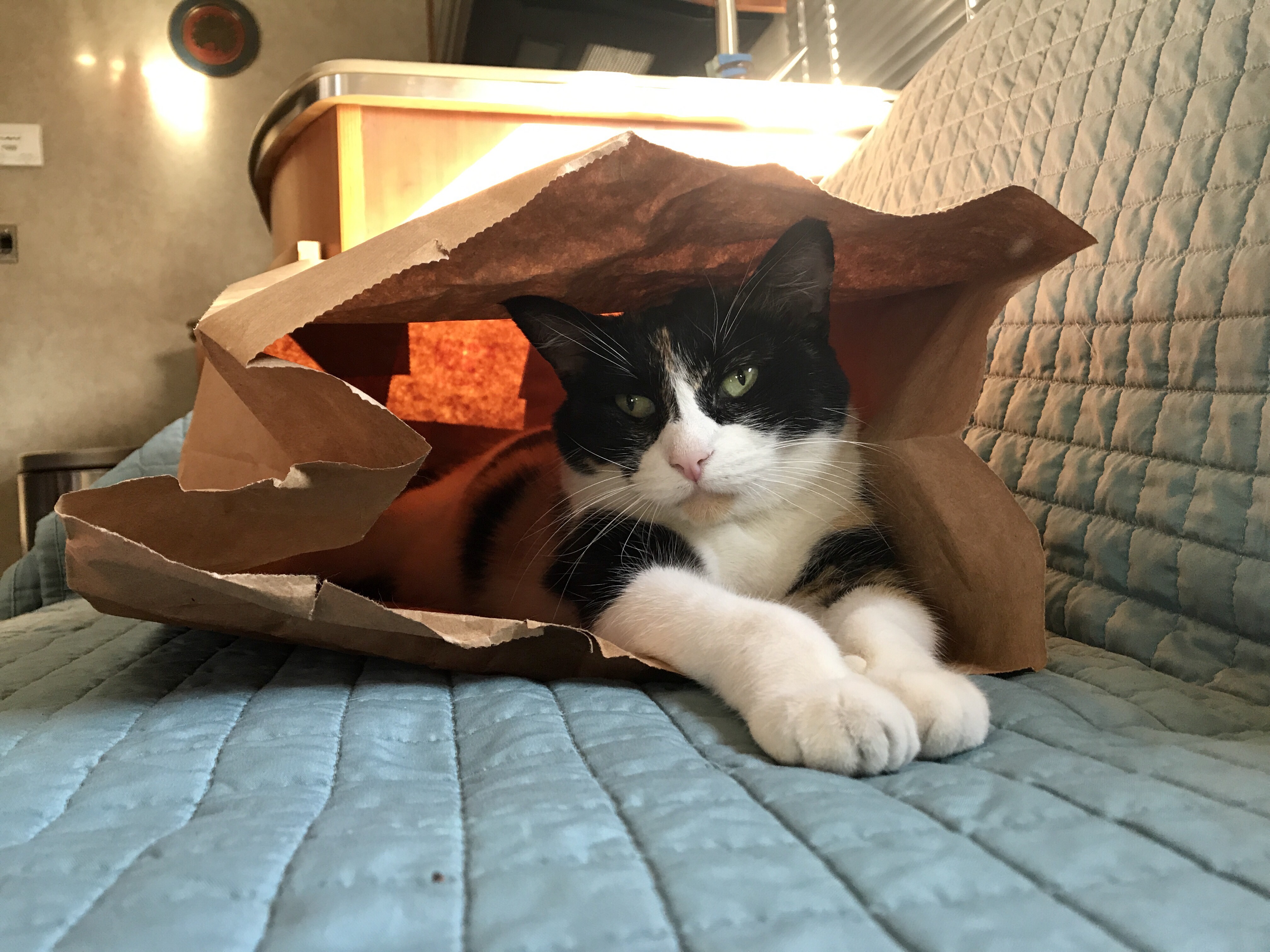 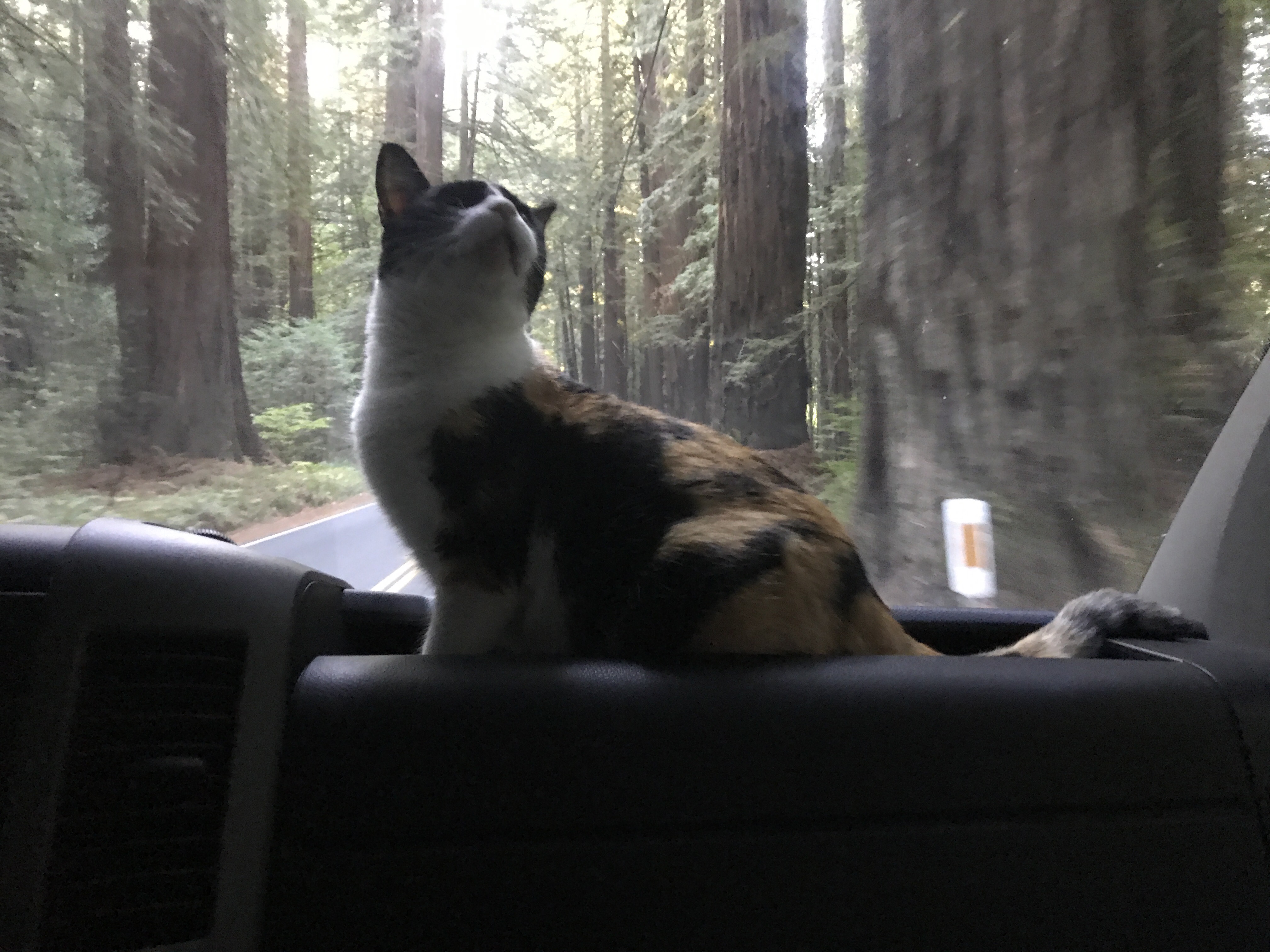 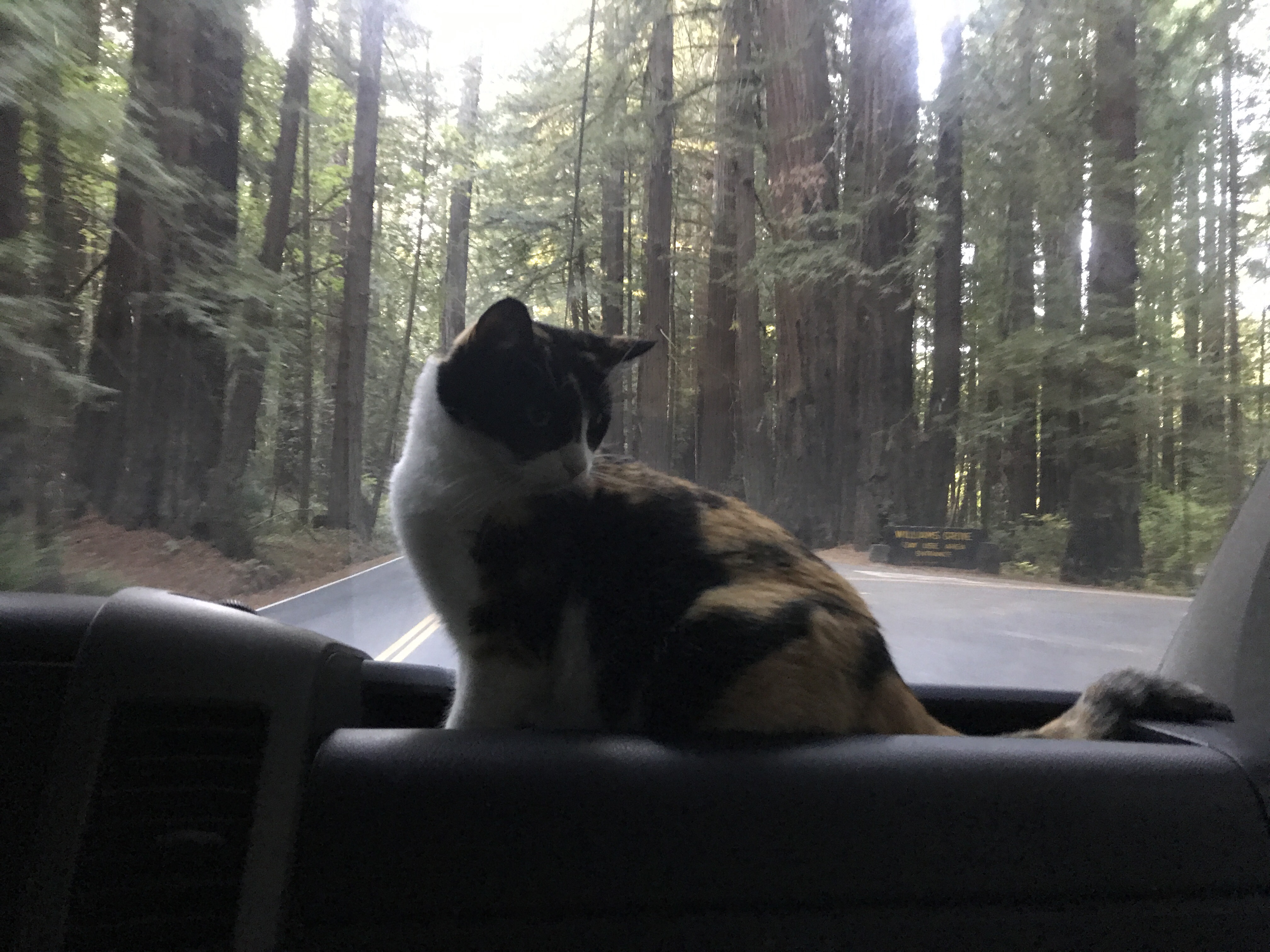 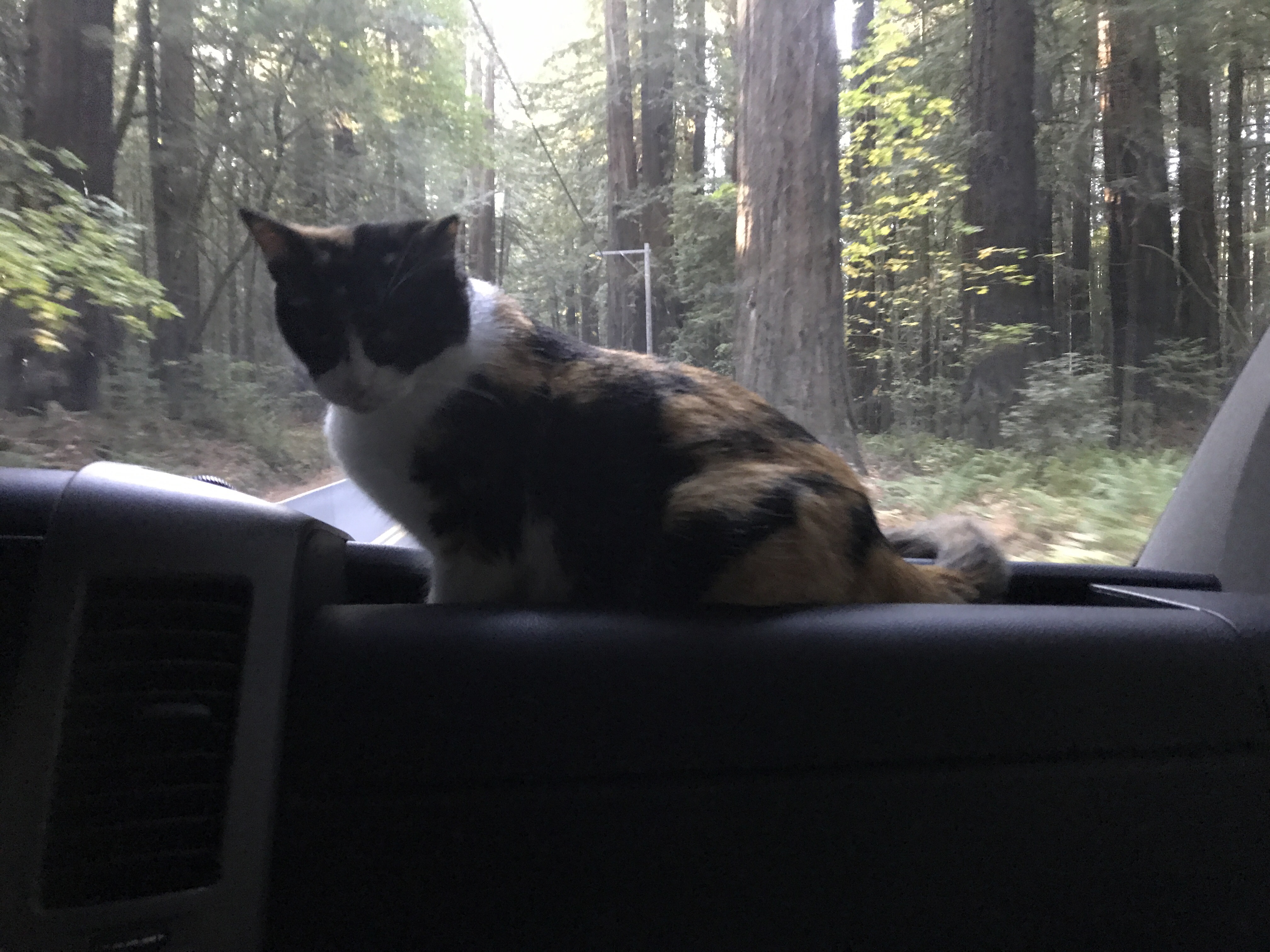