I have no idea where Callie picked up her guilt when it comes to being held lovingly in Michael’s arms, but guilt is what she feels. Ever since Michael had his hand surgery, and to add insult to injury he developed bronchitis after a lengthy cold, Callie has taken it upon herself to stay close to him and see that he heals properly. If I walk into the room and she spots me looking at her, she startles, leaps out of his arms, and races a safe distance away, only to start grooming herself. I haven’t done anything to warrant this guilt, and I am doing my best now to make her feel safe and unjudged while conducting this sordid little love affair with him. I have decided that it is best to give her plenty of noisy warning before I walk into the room, and I am careful not to make eye contact with her when I do. In fact, I make sure to avert my gaze and talk to Michael facing the other direction. The only thing I can think of that could possibly be making Callie feel guilty about her love for Michael, is that I am her primary caretaker, her slave, and I have been doing it for the past 5 years. When we reluctantly adopted her as a stray, it was me that took it upon myself to feed her, groom her, and clean out the litter box. I also took  the time to brush her and try to keep her clean and free of excess fur. It is also understood that I am capable of reading her every signal and that we communicate with each other effortlessly. Michael hasn’t really had all that much to do with Callie before he retired. He would come home exhausted after a long day at work and sit in front of the TV. I believe what is happening now, is that she has discovered that Michael is trainable, and she is schooling Michael in the delicate art of getting what she wants; which is hours of uninterrupted petting! This is something that I am not so keen to do. I am busy and active, I move around a lot, and I don’t take the time to hold her for hours at a time. So Callie has found her ideal slave-masseuse who will cuddle and pet her for hours at a time. She also has stopped shouting at Michael! She use to raise her voice while looking up at him as if she thought he didn’t quite understand what she wanted, making it necessary to meow louder. Can you hear me now has turned into an expectation that he will fulfill her every desire. Now I haven’t stayed married to Michael for 37 years, and together as a couple for 40 years for nothing. Callie has only been around for 5 of those years, but we both obviously think he is a keeper! It would be a win-win if Callie and I could just agree on how to share him unconditionally. Then her sordid little love affair could come out in the open, and we could all get along famously! 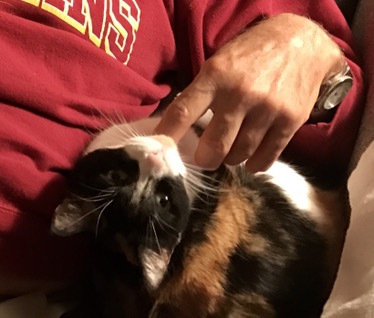 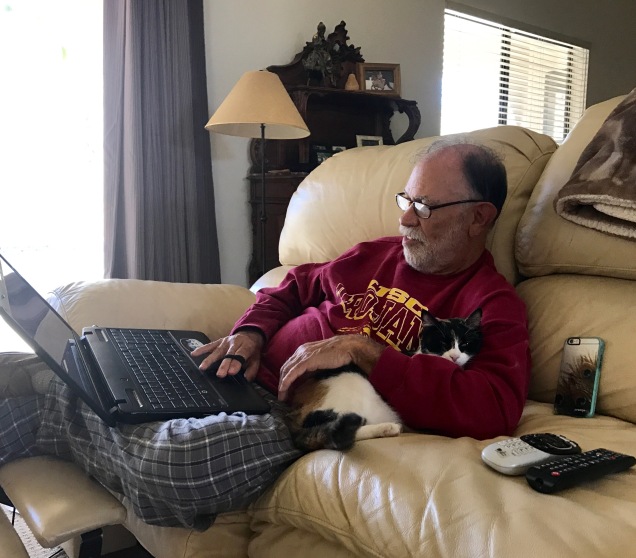 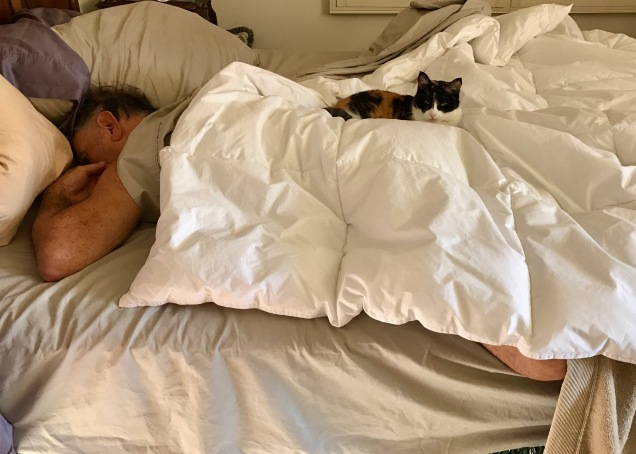